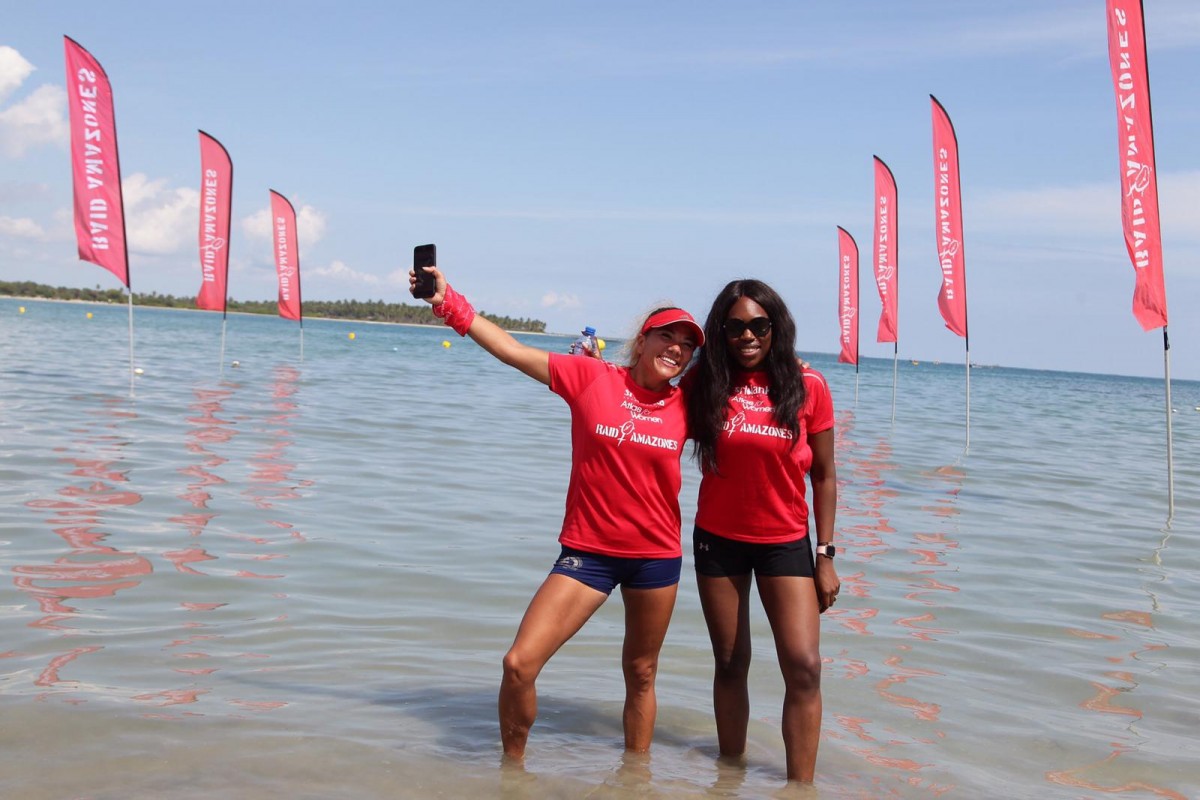 Whenever I travel, I try to combine fitness and travel together as much as possible. Theres nothing better than exploring a new location via running or cycling. So, when I was asked to participate in the Raid Amazones, I jumped at the opportunity to spend 10 days running, cycling and canoeing around Sri Lanka.

I had such a fabulous time, I didn’t realise just how much I enjoyed active holidays until the Raid Amazones Race. I felt like a full time athlete. Rising at 5am for breakfast before taking part in the race, and then spending the afternoon and evening resting and planning my strategy for the next race. 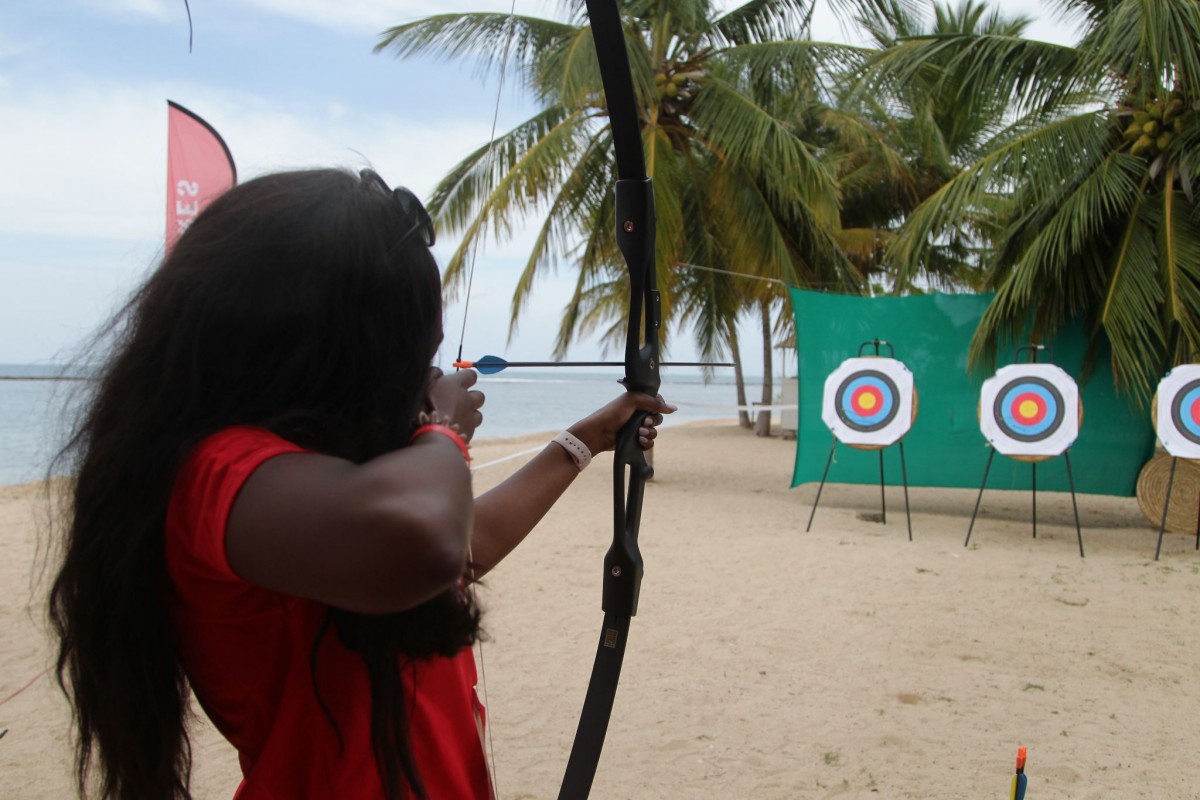 What is Raid Amazones?

Raid Amazones is a French race and most of their website is in French at the time of writing this blog post, so I’ll try to make this post as informative as possible to answer any questions you might have.

Raid Amazones has been going for 9 years and since then, there have been 18 Raids. A Raid is a multisport race for women, who compete together in teams of 2 or 3. There are a total of 280 participants, you pick your own teams and the overall team winners of 2 and 3 receive a cash prize, which they can donate to their cause. There are usually two Raids per a year, falling in March and October and they take place in some of the most beautiful places in the world like Sri Lanka, Kenya and Bali.

The trip usually lasts for 10 days, but the Raid only lasts for 6 of those days. It costs 3320 € per person, and this includes your accommodation, transfers, meals and race security. I’ve never participated in a trip like this before, and I personally thought it was expensive. And I still do. However, I cannot fault the Raid on their security and safety throughout the trip and that alone would have probably cost a good couple of buck.

What happens during a Raid?

A typical day will see you waking up around 5am for breakfast and you’ll start your race at about 7.30am. Depending on the activity, you’ll head back to your hotel at around 11am, have lunch and head on to your afternoon activities shortly after. Here’s a breakdown of our Raid to give you an idea of what to expect day by day at the Raid Amazones.

We arrived in Sri Lanka on Thursday evening after leaving London on Wednesday morning. I usually don’t mind travelling but after arriving in Sri Lanka, we had to take a 7 hour coach journey to our hotel. There was also only one stop for food and a toilet break. The coach journey was longer than the flight from Paris to Doha! Hopefully they’ll look at a different location for next time so that participants don’t have to make this journey again.

Friday was race kit check day, and our first proper chance to see Sri Lanka. My race parter Susie, and I woke up before breakfast to go for a 5km run along the beach. We then spent the remainder of the day preparing for the race and checking in our kit. There is an extensive kit list for this race, including bike repair kits, camel backs, helmets and you also need to have the appropriate medical documentation too. Once you’ve checked your kit in, you’re free to spend the rest of the day as you wish, and in the evening we had our very first race briefing. The race briefing was all in French, it’s a French race after all. Race participants very kindly translated for us so we knew exactly what to expect the following day. 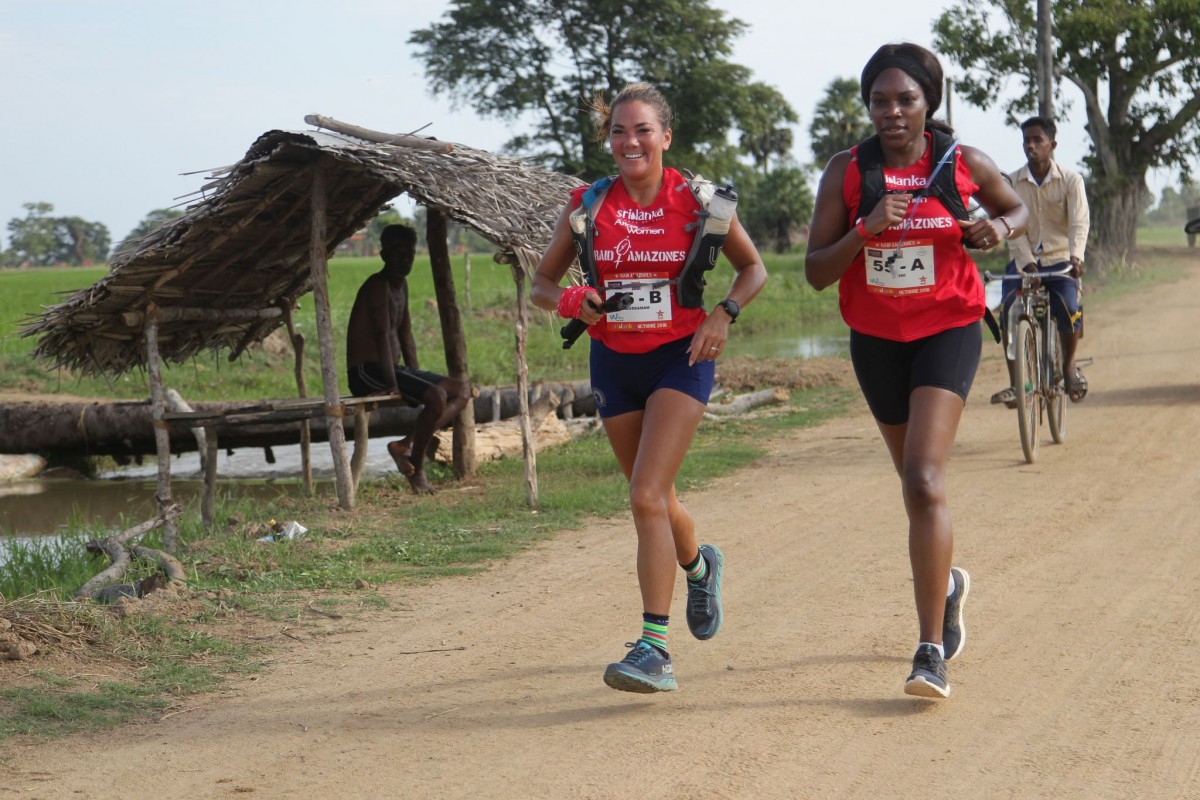 Race day! Our first race started with a 16km trail run. This was the first time that I’d ever ran trail before and despite my reservations, I LOVED IT! We set off at around 7:30am and spent the morning running through the fields of Sri Lanka. If I had been better prepared, I would have probably packed trail running shoes, but my normal running shoes actually held up pretty well. Due to setting off early, we didn’t really feel the heat until the later stages of the race. When the sun rose and the clouds cleared it was HOT. But it never got to the point where it was unbearable. If you make sure you stay well hydrated and run at a pace that feels comfortable, the heat shouldn’t effect you too much. Susie and I placed first in this race.

The afternoon was spent playing Archery on the beach. Like the morning events, the afternoon events are compulsory but they are a lot more chilled and usually involve a skill. 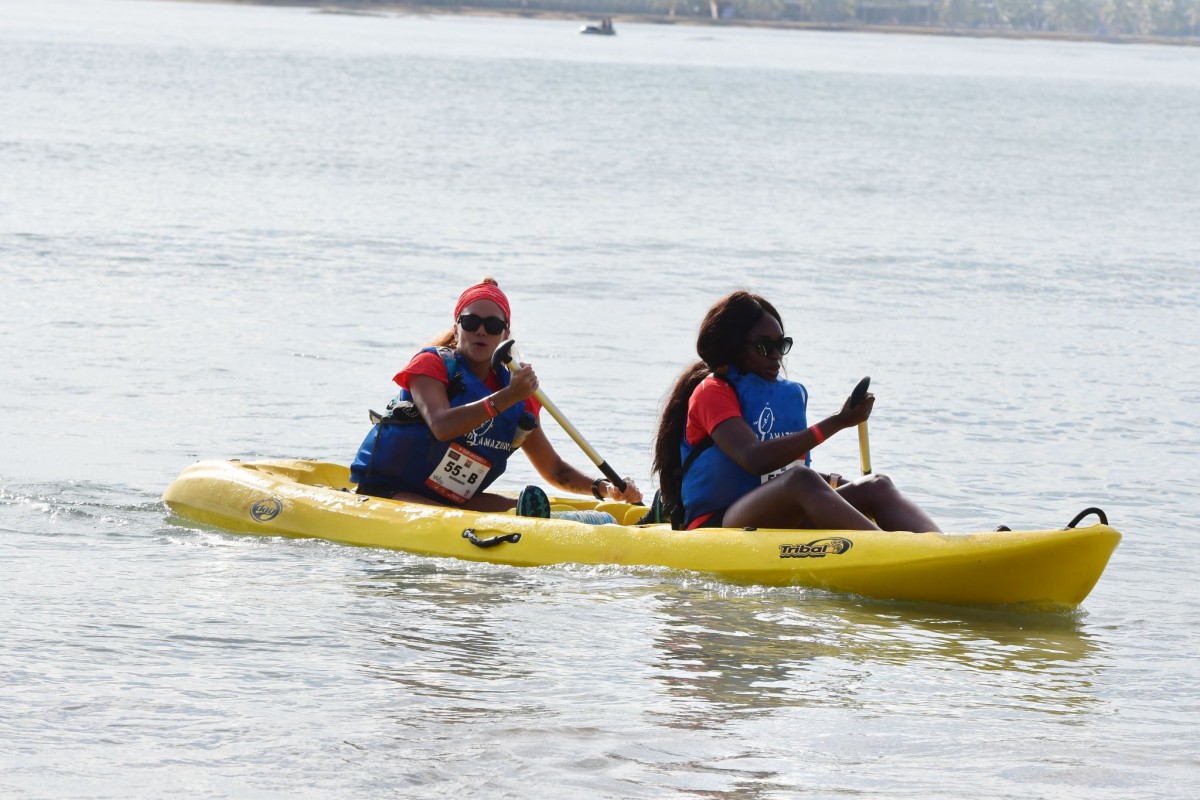 The Raid usually includes one water sport and our sport was canoeing. Susie and I didn’t practice canoeing but I didn’t think I’d need to. I can row and kayak, swim, snorkel and scuba dive… how hard can canoeing be? Ha! It took Susie and I half an hour to canoe just under 2 miles. At the rate we were moving, it would have taken us 6+ hours to complete the 2-3 hour course. The race director kindly told us that we could pull out of the race when we reached the first check point, 30 minutes after setting off, and we happily agreed. Never again! 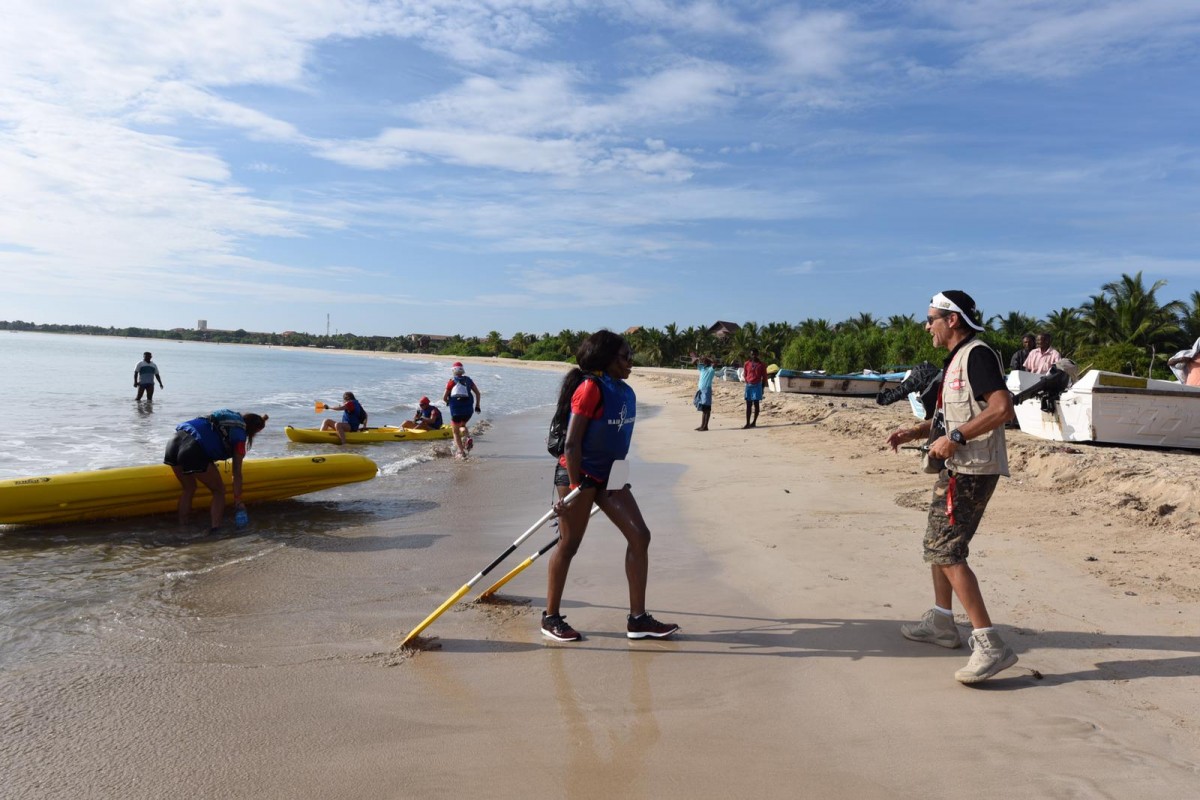 Next up was Mountain biking. A 50km bike around Sri Lanka. I can ride a bike, but I don’t usually cycle so I knew i’d be in for a challenge. The terrain wasn’t great so safety came first. After a couple of minutes, we passed a girl covered in blood. She came flying off her bike. Neither myself or Susie considered ourselves to be experienced mountain bikers so we decided to take it slow and didn’t care about where we placed. We just wanted to be safe. After about 9km I was struggling with the most excruciating back pain. My bike was a poor fit for my long legs and short torso. Susie gave me some pain relief which managed to get me to the half way point and then we decided to swap bikes. I noticed the difference instantly, and so did Susie. Her bike felt like a dream compared to mine! It was a much more comfortable ride. I offered to swap back but Susie wasn’t having it- what a great team mate! 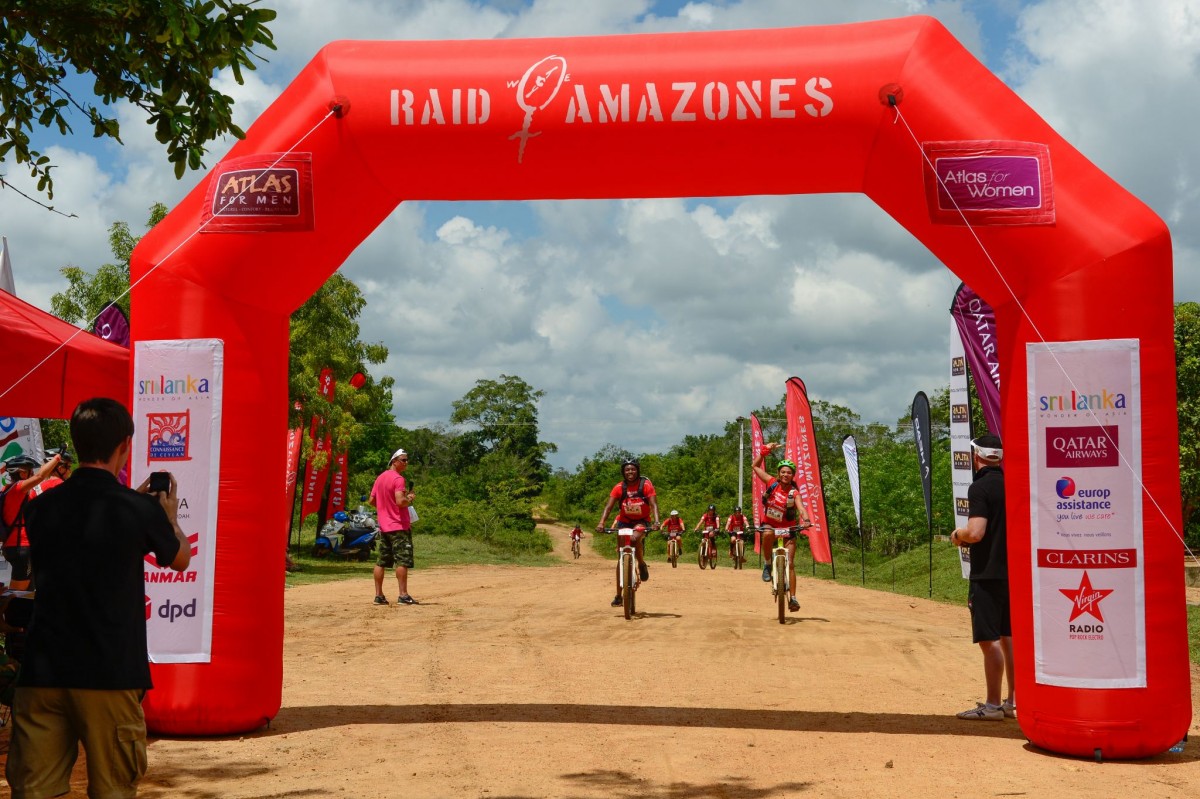 It took us around 3 hours to complete the ride, which was mostly down to the terrain. And although it was a long time being out there, I actually enjoyed it! So now I’m going to invest in a bike and a pair of cycling shoes, and take up cycling! I’ve got my eye on the Ride 100 next. 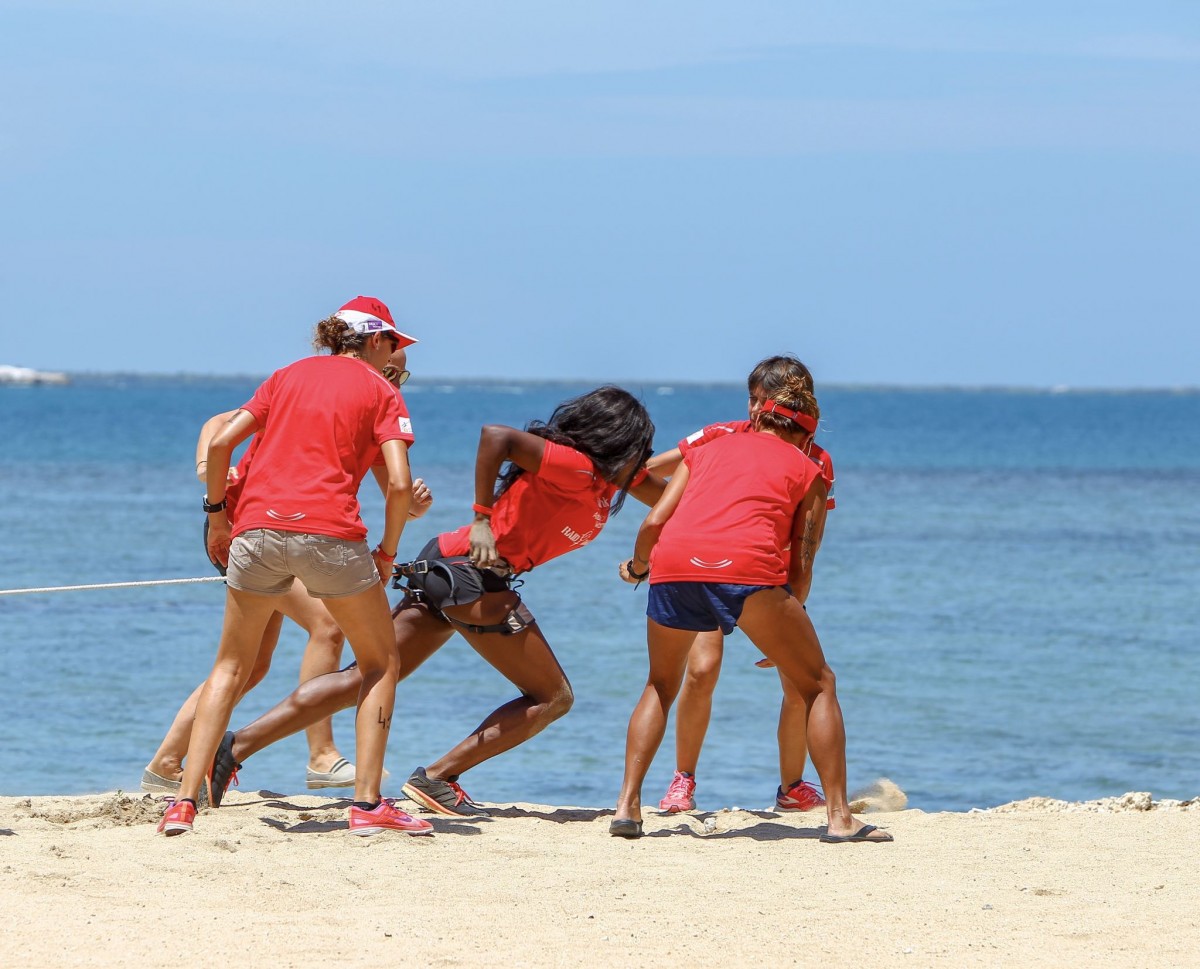 Today was kind of an active rest day. We did Orienteering and I really wish we had the day off to explore Sri Lanka properly. The event lasted for 3 hours, but it could have been much much shorter. That being said, I’d take orienteering over canoeing any day. 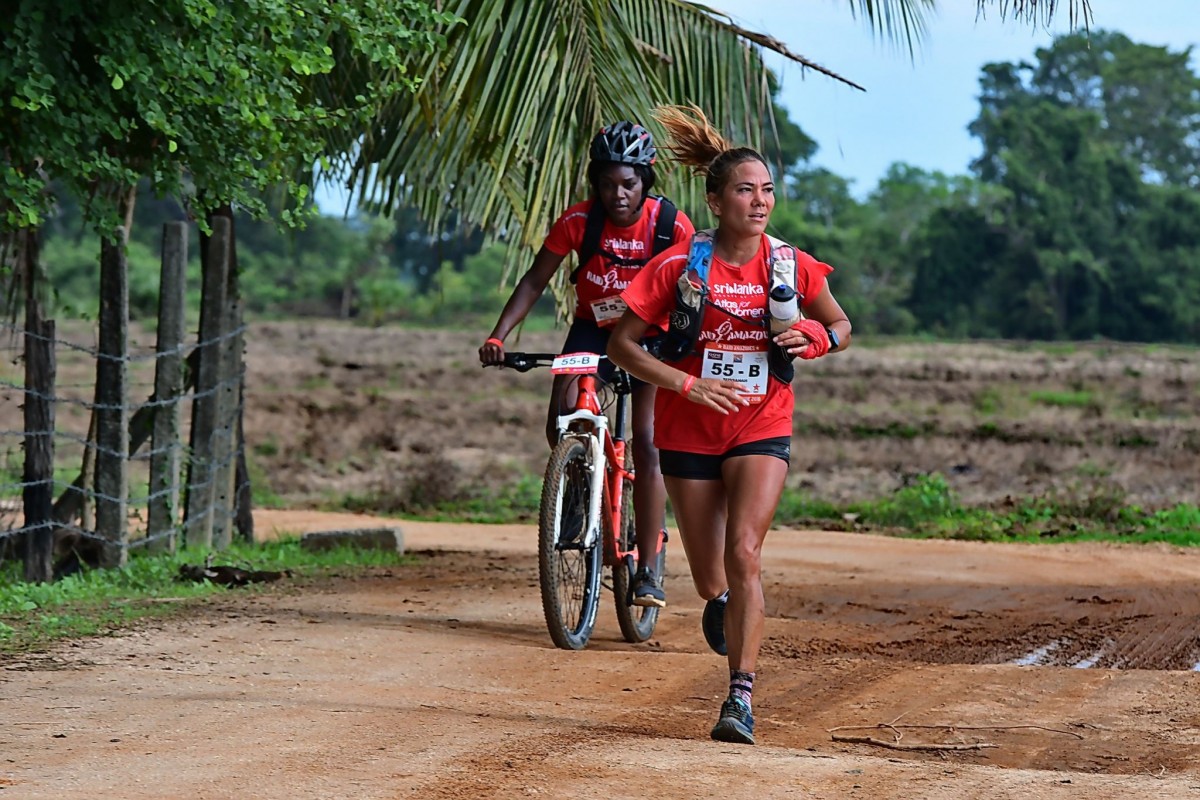 Today was meant to be our second day of canoeing but fortunately they had a change of heart and turned it into a bike- run. We had to cover the half marathon distance but, someone had to always be on the bike and the other had to be running. Susie and I decided to use our speed endurance and did the race in 3km intervals. One would run for 3km whilst the other cycled for 3km. It was another trail run/mountain bike but my legs actually felt ok.

Transitioning from the bike to running and back was actually quite fun and it was at that moment I decided that I was going to try a triathlon next year. But, upon returning to London, reality hit and let me tell you know, there is no way I am doing an open water swim. Unless I’m swimming in Evian water! 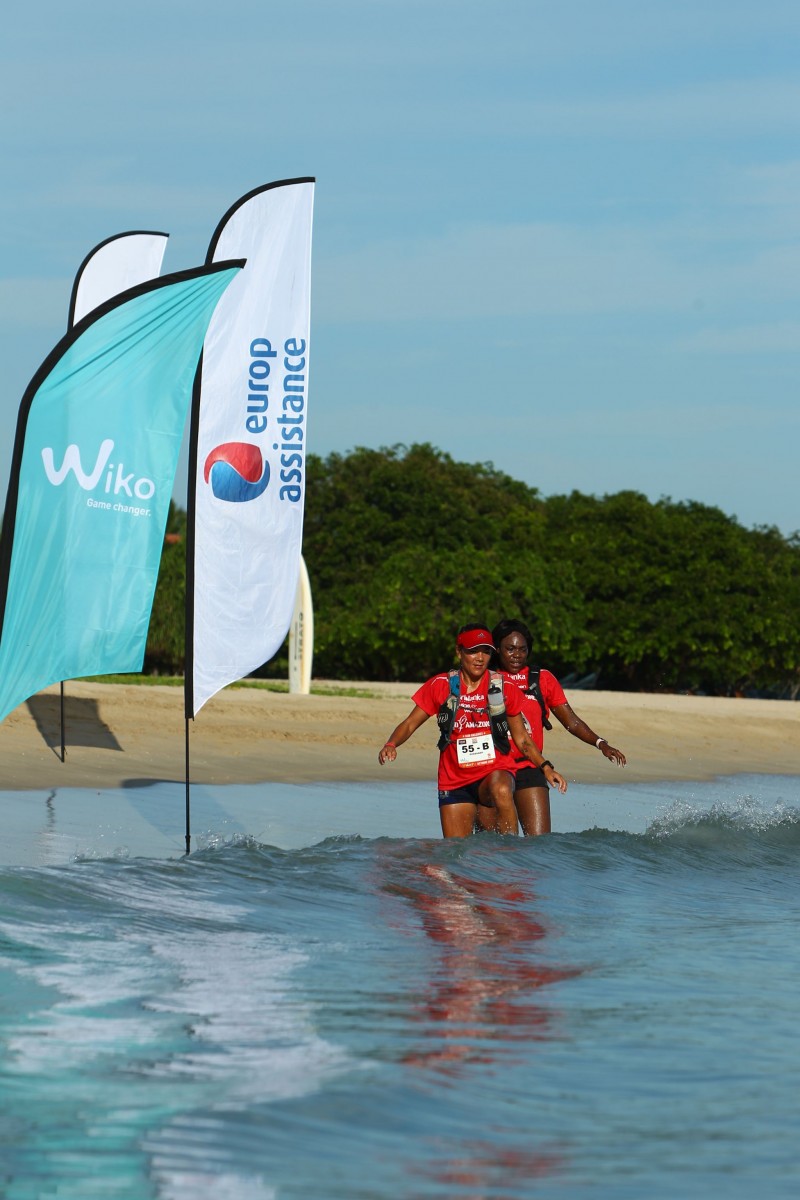 Our final day of racing ended with a 10km run. This time the terrain was a little better, but we had to complete the final 400m via sea. I knew running through the sea would be tough but I didn’t expect it to be that tough! As soon as I stepped into the water, my legs turned into jelly and we spent the next few minutes wading through the water. Susie and I crossed the finish line first and it was the perfect way to round off an incredible adventure. 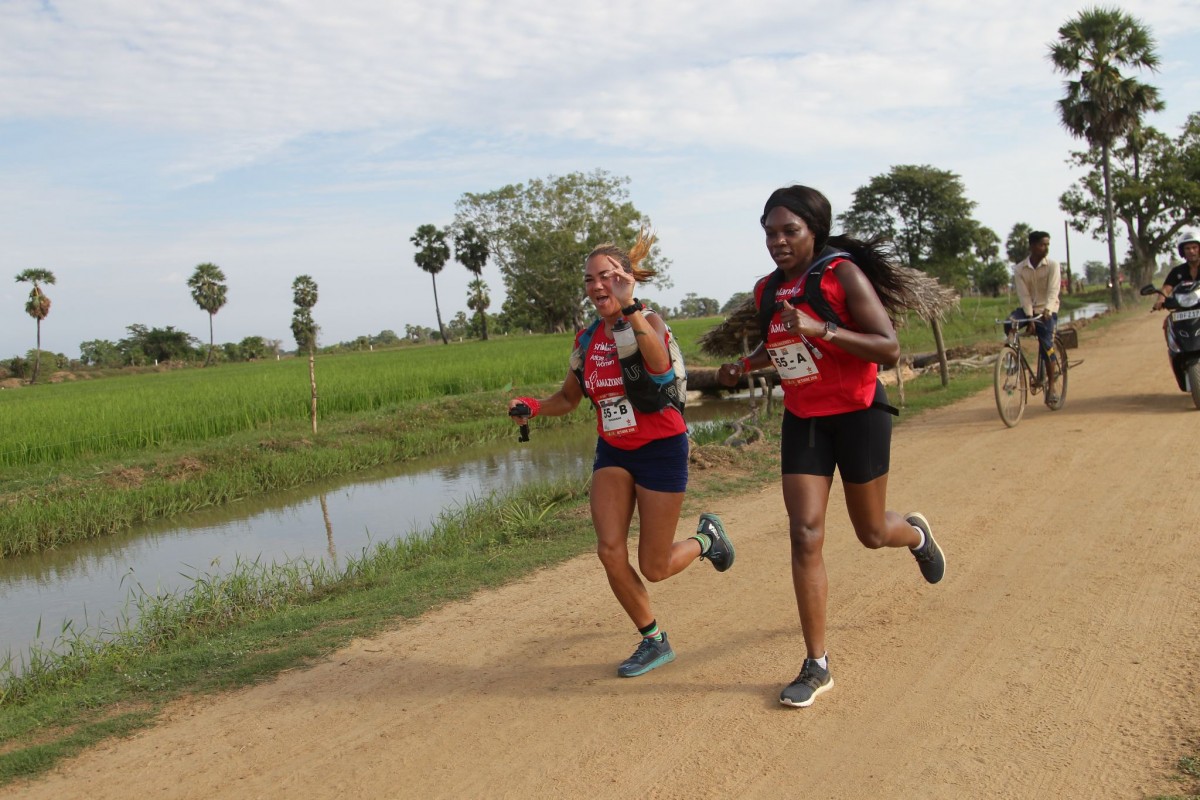 Do you get much downtime?

Yes! Prior to leaving, We joked that we’d have to sneak off to have cocktails by the beach, but much to our surprise we actually had a good amount of downtime. The morning activities are usually done by 11 and you’d return to the hotel shortly after. Afternoon activities start after 1 and finish a few hours later, but some afternoons were kept free so that you could enjoy the markets, explore the town…or have a cocktail by the pool. 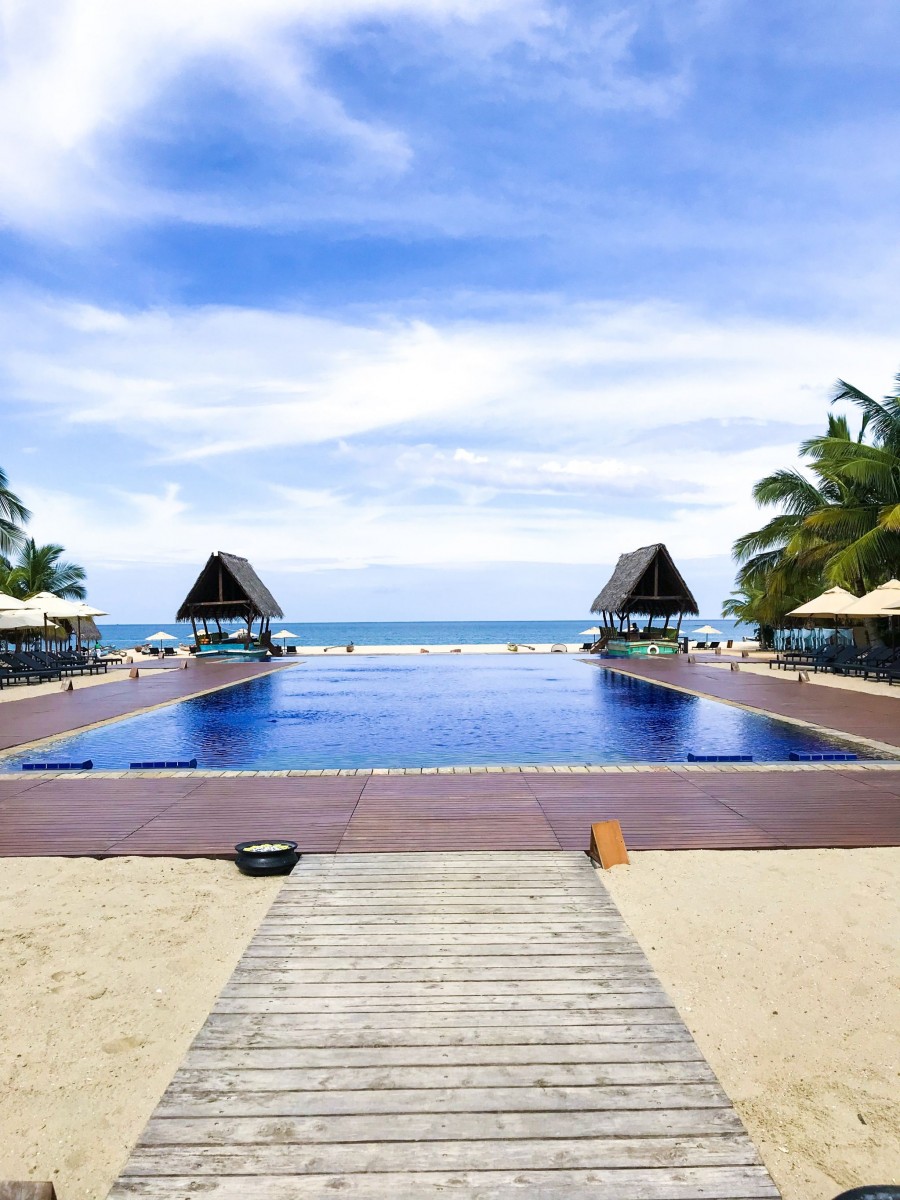 What should you pack?

You’ll receive an extensive race kit list which you’ll need to follow. The list pretty much covers everything. Just remember to bring insect repellant and Sudocream for when the insects do bite!

Do you have to be “fit” to take part in a raid?

I’ll be honest, some of the girls on the trip said they spent months training for the race. And, although the website says the race is “accessible”, I’d recommend having a good baseline of fitness before attempting the Raid Amazones We covered more than 100km in 6 days via foot, canoe and bike. Which is more than I’d ever covered in a week! I don’t even think I got near 100km weeks during marathon training.

The runs were all trail and the shortest distance was 10km. I wouldn’t worry too much if you don’t have much trail running experience. But, you might want to take the heat into consideration. I am a confident runner and actually respond well to heat training but a lot of the girls struggled and some fell ill. I’d also recommend training for the water activity as they’re a little bit harder to wing than running/cycling…we found out the hard way. 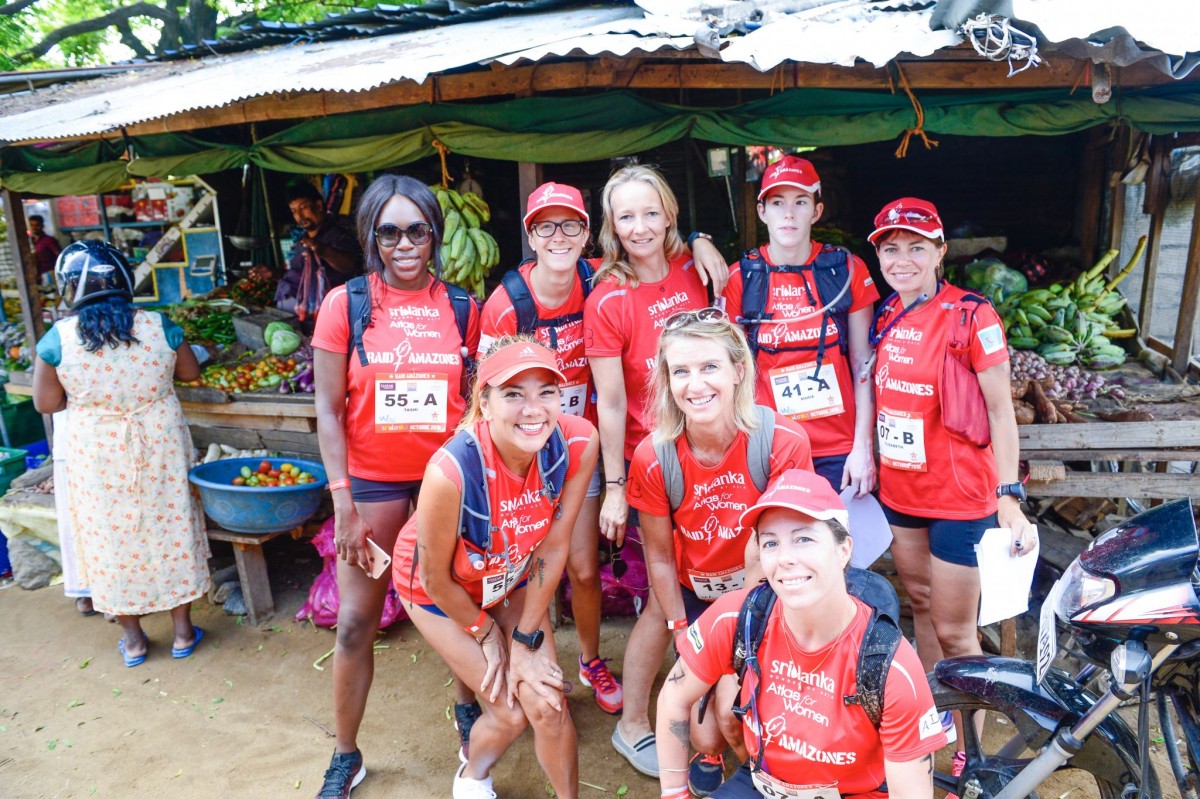 Raid Amazones is a race that champions female solidarity. This was my first fully active holiday and I throughly enjoyed spending 10 days stepping out of my comfort zone and challenging myself. I found a new love for cycling and it temporarily inspired me to do a Triathlon. But for now, its back to half marathons, 5kms and 10kms.

Let me know if you’ve got anymore questions about the Raid Amazones, would this be something you’d be interested in doing?