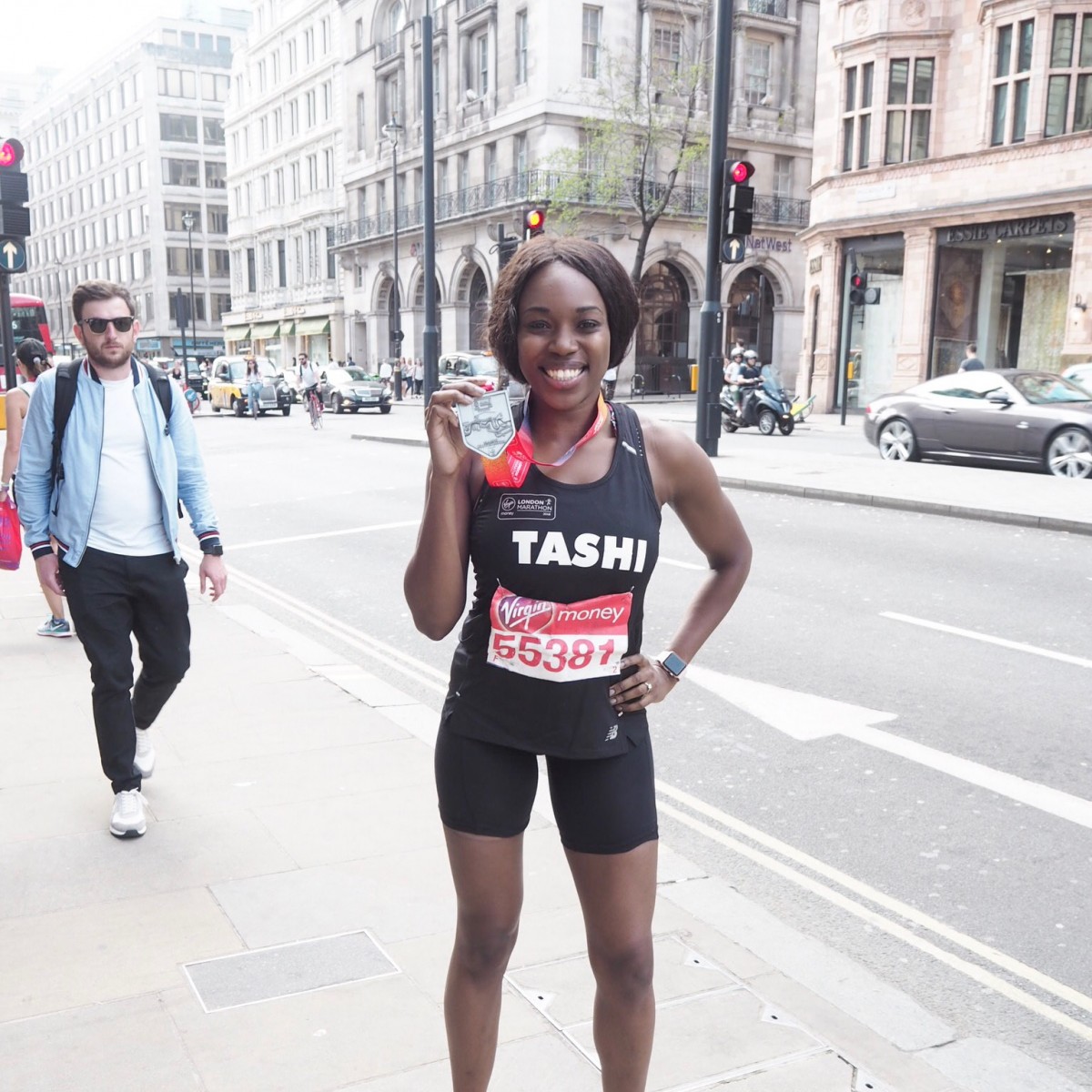 The London Marathon made it on to my bucket list in 2015 and a few years later, I was given the opportunity by New Balance to run the 2018 London Marathon. It was without a doubt one of the best and worst experiences of my life. That sounds a bit dramatic but trust me, it was!

If you’ve read through my blog or follow me on my social media channels, you’ll know how tough I found the winter training. I hated everything about it. The dark mornings made it harder to get out of bed and don’t even get me started on the cold. I did my longest run in the snow and it took me about 6 hours to thaw out. But, I managed to make it to the start line without a single niggle or injury and that in itself is a huge achievement. And on Sunday 22nd April I turned up to Greenwich park feeling a little bit, and I mean just a little bit, excited. 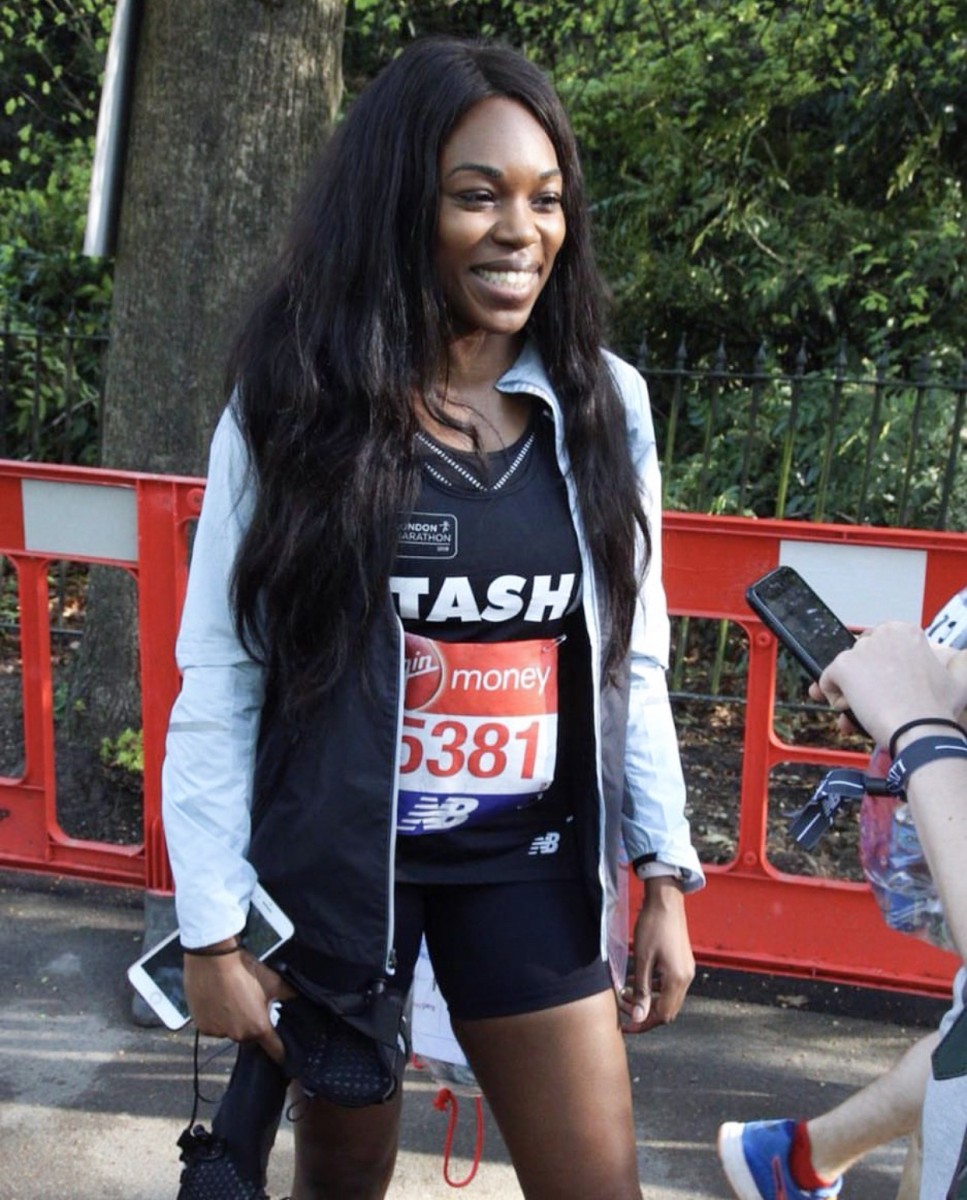 I was in the red start which meant that I would begin my race in Greenwich. So, I made my way from the station to the start line on my own but managed to bump into my friend Gavin, along the way. I mean what are the chances! We spent the next 40 odd minutes giggling at the fact we were going to be running the marathon. But as the start time grew closer, we said our goodbyes and Gavin walked up to Wave 1 whilst I slotted into wave 2 and did my warm up.

The next 20 or so minutes flew by but in that time I was able to decide on my opening song to run to and overhear everyone’s race strategy. There seemed to be a common theme, forget about a PB and just enjoy the race. It was already quite warm and the temperature was steadily rising. My aim was always to do a 1.50 first half and a steadier second half, so I thought I’d stick with my strategy and amend where necessary. If I’m completely honest with, I wasn’t particularly bothered about my time. I just wanted the race to be over so my focus was on finishing.

I felt quite uncomfortable for the first 7 or so kilometres of the London Marathon. It was probably because I was very aware of just how far I had to go. I crossed the 10km mark on time and started to settle into my race. It felt a lot less busier on the road too, I was no longer having to weave around runners as everyone had started to find their pace.

The miles leading up to the  halfway point were a bit of a blur if I’m honest. I just remember thinking “these miles are flying by!” I also remember throwing water over myself at every station and thanking kind strangers for cheering me on. Speaking of kind strangers, to the spectators handing out ice poles, I LOVE YOU! The ice poles may have only cooled me down for a second but I was so grateful.

The Half way point

Whenever you hear people talk about running the London marathon, Tower Bridge always comes up. I heard it was magical but when I turned the corner and saw it in all it’s glory, I almost stopped dead in my tracks to just look and stare. I continued running and as I looked around me I wanted to cry. The streets were lined with spectators roaring, the sky was blue and the sun was shining. At that moment in time, I realised just how lucky I was to be running the marathon and felt spurred on. 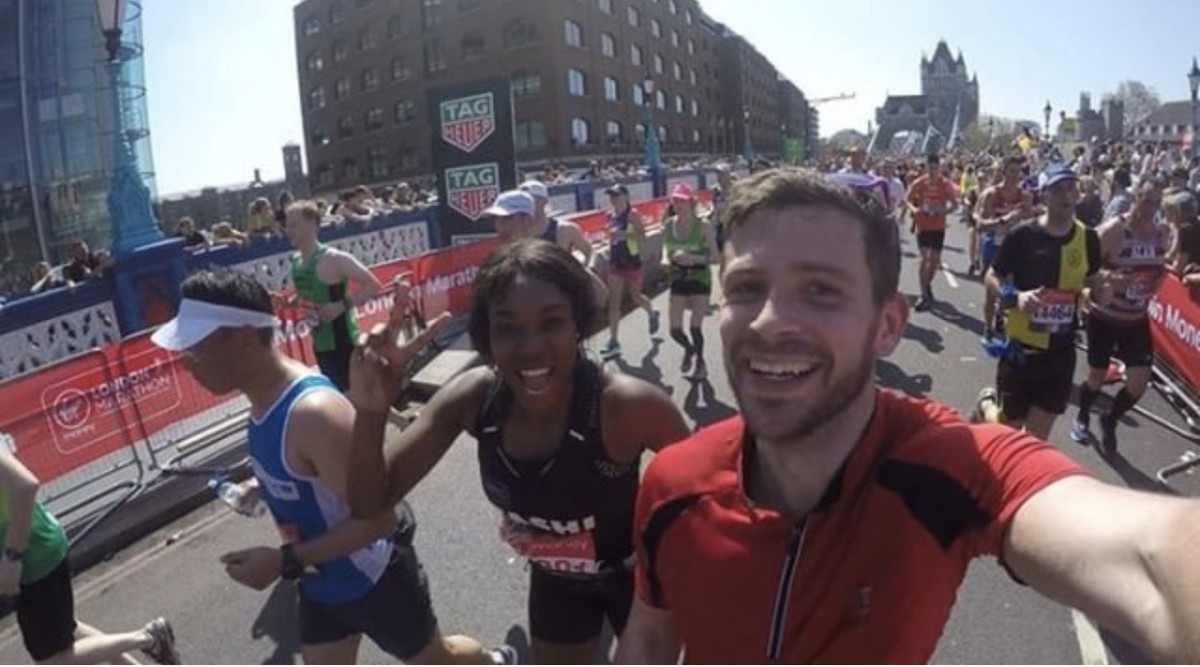 Feeling a bit emotional, I longed to see a friendly face as I hadn’t seen one since before the race started. On cue, Matt rocked up out of nowhere and we ran beside each other before he moved on. We were both feeling hot and Matt had a bit of cramp but we didn’t feel too bad. I ran through the half marathon check point at 1 hour 50 mins, right on time.

The race took us down towards Canary Wharf and the dream of finishing the London marathon was starting to become real. The furthest I’d ran in the training cycle was 18.7 or so miles, so everything after that was a bonus to me. 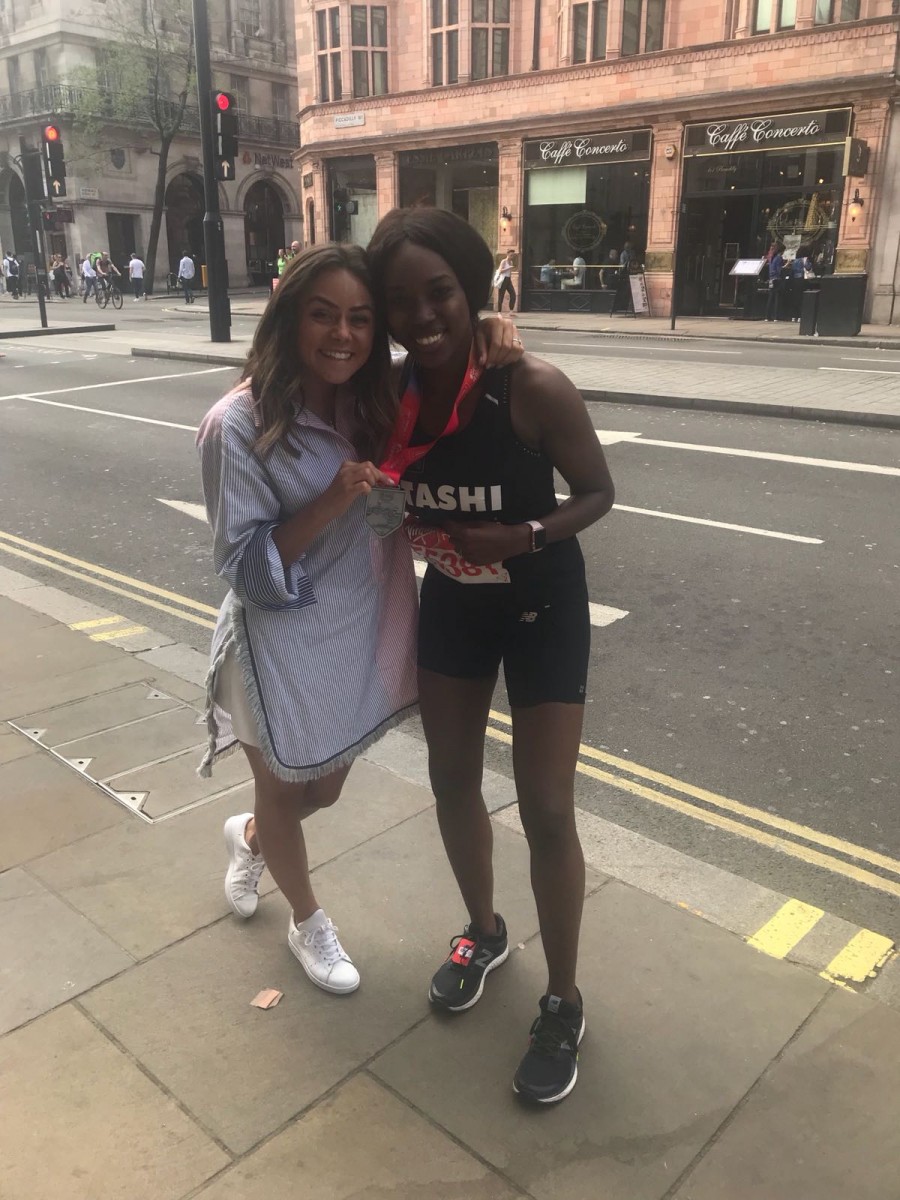 Whilst running through Canary Wharf I saw my best friend Ellie cheering on the side lines. I gave her a quick hug, picked up the pace and headed towards miles 19 and 20. Seeing Ellie gave me such a boost. I was almost home, just keep going, is what I told myself. My pace had slowed down and I was having to pick up water at every station to keep my body cool but pace didn’t matter. I was 10km away from finishing the London Marathon. I was going home.

Mile 20 came and it was actually tougher than I wanted it to be. Being out in the sun was taking its toll and my legs were starting to feel heavy. “Get to Mile 21”, was what I kept telling myself over and over again. Run Dem Crew have an amazing cheer zone at mile 21. And before I knew it started to see the words “You’re now entering Cheer Dem” painted on the floor in bright colours and then came the noise!

I can’t really remember where it happened but somewhere between Mile 21-23 I got cramp. Like real bad cramp and I wasn’t able to shake it off. I could barely run. My left quad had become a stiff as a board. I couldn’t move it. I stopped and stretched it out and as I looked around people were doing the same thing. There was a man lying on the ground with his legs in the air as two runners were shaking them out for him. Another guy was using the pavement curve to stretch out his calves. Running in the heat meant we were losing a lot of salt which caused our muscles to cramp.

I got back on both feet and made my way towards Embankment, mile 23. Oh how pretty it looked. I couldn’t believe that I was just over 5km away from the finish line but my leg was still cramping. It was time to make a decision. I could either try continue running with it or stop and stretch it out properly to prevent it from happening again. Thankfully, I chose the latter. I stretched it out as much as I could whilst a lady in the crowd fed me Percy pigs. After a couple of minutes the pain hadn’t eased but I decided it was time to go. I thanked the kind lady for the Percy Pigs and headed off.

The next miles were a bit of a blur but I suddenly remember seeing a 2km to go sign and getting excited. I wasn’t going to stop now. I pushed and pushed through and before I knew, it a huge 800m to go sign appeared out of no where.

This is actually happening is what I told my self. Keep running.

400ms to go. No seriously, Tashi. This is actually happening.

I saw the 200m sign and tried to sprint towards the finish line but my legs said “BEHAVE!” There was absolutely nothing left in the tank but I kept going.

I crossed the finish line in 4:13 and I couldn’t have been happier with my time. My left leg was still hurting from the cramp and my glutes were SO sore but it didn’t matter. I DID IT! Pass me the champagne! 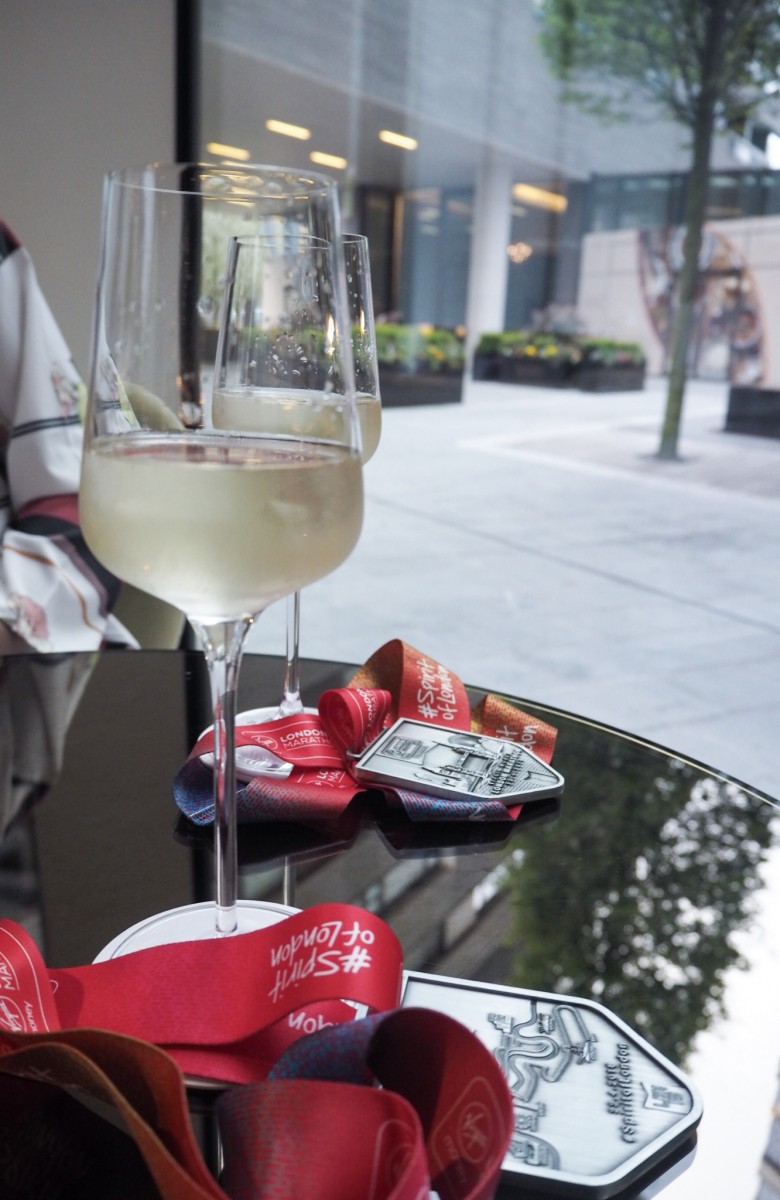 The London Marathon ballot for 2019 is currently open and before I ran the marathon, I said it would be a one and done but everyone said I’d be back for more. I must admit, the marathon was an amazing experience but you will NOT catch me doing another one anytime soon. I repeat, I will not be entering the ballot! Now that I’ve done it, right now I just don’t feel the need to do it again.

Oh London, I love you but that really hurt my soul.