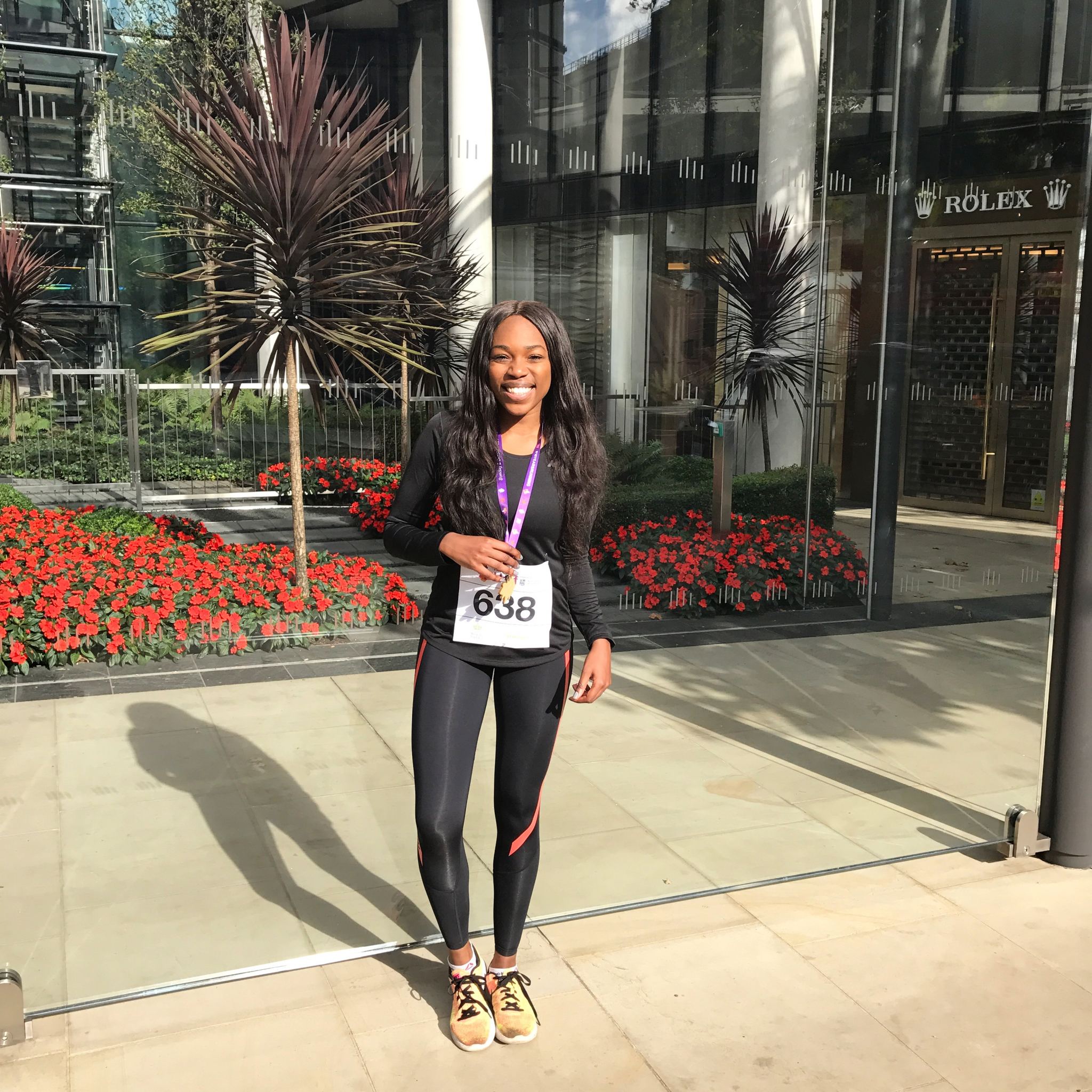 I knew that I could run a PB and when I woke up in the morning I felt like I could do it, so I did.

My half marathon journey begun last year at the Royal Parks Half Marathon in London. I didn’t enjoy it but I ran another half marathon shortly after. Although I enjoyed that one a little bit more…I vowed to never run a 13.1mile race again. Fast forward to present day and I have just completed my 4th and fastest half marathon and I am on the look out to complete another one, and another one until I reach my goal time.

If you’re read my blog, you may have come across my Berlin Half Marathon experience earlier this year and how a shock PB help me fall in love with half marathons. I went to Berlin expecting nothing due to a lack of “traditional” half marathon training, and took home with me almost a 9 minute PB as I crossed the finish line in 1:40:57.

I wasn’t actually planning on running the Royal Parks Half until TruBe kindly offered me a place 6 or so weeks before the race start date. You may be wondering why I wanted to run it again after saying that I didn’t enjoy it and thats because I felt like I had some unfinished business. Last year I had really bad shin splints and couldn’t give the race my all so I wanted to give it another go.

Royal Parks Half is a PB course because it’s flat, scenic and has immense crowd support. I spoke to handful of runners afterwards and everyone had got a PB. So if you’re new to half marathon running or want to run a PB, I would recommend running this race. You spend the first 5 or so miles running around the close streets of London and then spend the majority of the race in Hyde Park. I love this part of the race, where you are surrounded by trees and greenery. This is where the majority of the crowds are too.

The race however is busy and from runner to runner, please be realistic with your times when you sign up! If you know you can’t run a sub 2 hour marathon, don’t run with the sub 1:50 runners. This happened a LOT last year and it just made the whole course congested and meant the faster runners had to do lots of weaving. Be kind to your fellow runners!

On the morning of the race, my sister asked what time I was aiming for and I told her 1:38ish and I ran it in 1:38:40, a 2 minute PB and beat my previous Royal Parks time by over 10 minutes. I wasn’t surprised however, I knew my body was performing well and it did what it was meant to do.

When It comes to running I think its important to remember that not one size fits all. Some people thrive off running long distances in preparation for races. Others, like me benefit more from speed endurance sessions. Once you find a training method that suits your genetic make up, PBs are inevitable. 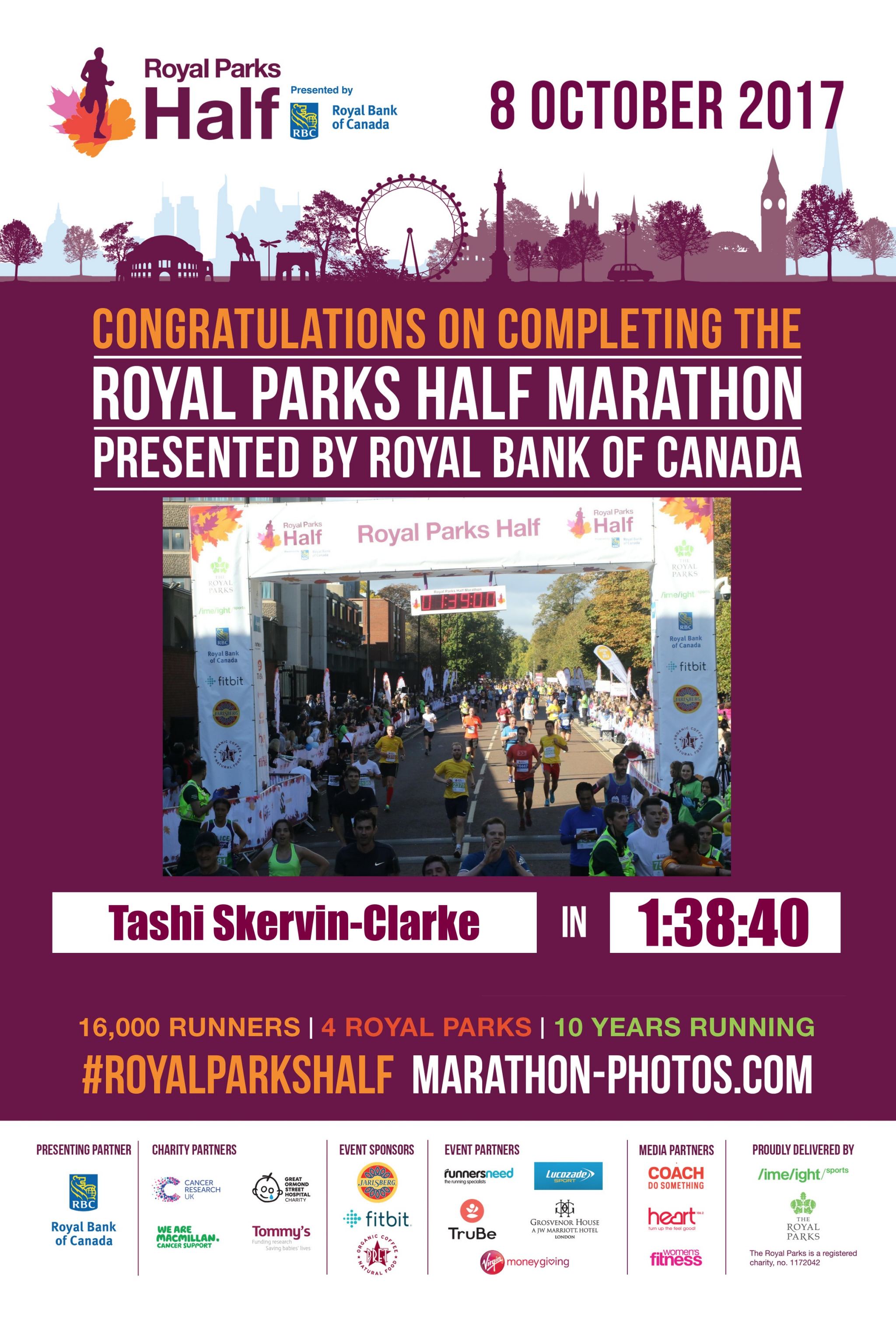 The race its self was fantastic. We had the weather on our side and the crowds were phenomenal! I can remember running into Hyde Park thinking “Jheeze, still got another 6.5 miles until I’m home” and on cue the park erupted as runners came filtering in. I felt like a professional athlete and it was as if all of these people had come to watch me run. I couldn’t help but pick up the pace and made it my absolute goal to stick to my “goal pace”, which was 7 mintues and 30 seconds per mile.

Speaking about pacing…my Apple watch absolutely threw me for the first 5kms by giving me inaccurate readings which meant I ran the first 5km in under 21 minutes, instead of 23 minutes which is what I had planned. As I ran through the 5km check point I looked at my phone in horror to see the time 09:21 flash up on the screen. A 21 minute 5km is great… but not when you’re running a half marathon and have another 16km to go! So I eased off the gas and reached the 10km mark in 45 minutes and 12 more seconds, which was still a little bit fast but not as fast as before. The next 5kms were a little bit slower than the first two but I think it’s because I was feeling a bit cautious and didn’t want to burn out. I ran this section about 2-3 minutes slower than my goal pace but because of the super speedy start it evened everything out. My legs must have enjoyed the rest as the final 3km were some of the quickest! I ran the final km in 4 minutes and 18 seconds and that’s probably down to the final 800ms where I sprinted to the finish line. I say sprinted…my legs were tired so it was more like a fast run.

This race was my favourite one yet. I felt comfortable and confident running the 13.1 mile course that felt daunting the year before. I’m going to try to make Royal Parks Half my annual autumn half marathon because it’s where I really found my love for dare I say it… long distance running!

Did you run the Royal Parks Half? How did you find it?